Rei Kuroki (黒騎れい, Kuroki Rei?) is one of the main characters of Vivid Red Operation. She belongs to the same class as Akane and the others, but doesn't socialize with other people, always preferring to be alone. Rei always wears a purple scarf around her neck.

Rei is a second year junior high school student of National Shin Oshima School, and belongs to Section A like Akane and the others. She is known for not interacting with her classmates outside of class, and is often seen alone. Rei lives in an apartment unit somewhere in Blue Island. Her apartment unit resembles an empty home, with only the bare essentials of a functioning home inside, save for a birdcage for her pet bird, Bisque. Her bedroom is also unusual for a girl her age, as it is filled with blueprints of the Manifestation Engine, weapons and different kinds of explosives.

Rei lived with her family in another world, only accessible by a special key. One day, when Rei opens the door to her world with her key, she finds that her house and world is being destroyed. Her parents tell her to leave, and she sees their silhouettes behind the flames. When she returns, there is nothing left of her world, and The Crow appears and tells he that an energy overload from the Manifestation Engine had destroyed her world, hence her vengeance towards the engine and the Human World. Unknown to her however, the only thing that The Crow promised was servtitude and she is merely an instrument for its mad quest.

By the time of Akane Isshiki's discovery of the Vivid System, Rei had already started working with the Alones in trying to attack and destroy the Manifestation Engine. As the Alone engage the Engine directly, Rei would position herself on a vantage point that allows her to see the attacking Alone directly and would fire a shot from her arrow if the need arises. Regardless of the outcome, she would swiftly leave the battlefield.

Due to the intervention of Akane and her friends, who one by one become users of the Vivid System, Rei's efforts during the last five attempts to attack the Manifestation Engine were all wasted.

As summer approaches on National Shin Oshima School, Rei's typical solitary life is shaken when Akane, Aoi, Wakaba and Himawari try to reach out to her and invite her to join their group for the upcoming summer camp. Rei swiftly rejected their offers and returned home as if nothing had happened, but not until she saved a young kid from harm on her way.

To Rei's shock, however, she was seen by her "superior", who comes in the form of a crow. The crow punishes her for "intervening in the affairs of humans" and reminds her of her role in the destruction of the world they are currently in. After this short confrontation, Rei is left to contemplate on her next actions, and she vows to destroy the Manifestation Engine without the help of the Alone that she has been helping.

That night, Rei attempts to infiltrate the Manifestation Engine facility. As she tries to sneak in the facility by scaling the towering structure however, she was quickly spotted by the facility's flying security robots. Rei uses her expertise in handling firearms and explosives to take down her attackers and makes a hasty retreat by plunging into the sea. The next day, Akane would discover her lying unconscious, washed away at the shores of Oshima.

Rei was unconscious for another day and only woke up after that, now wrapped in bandages while Akane is busy tending to her needs. Although reluctant to accept help from Akane, Rei eventually opened up a bit to her, although her priorities remain intact. Rei soon discovers that her most treasured key is missing, but as she forces her injured body to look for it, Akane suddenly leaves for "some business" after receiving a phone call. Meanwhile, the crow takes this chance to order Rei to perform her duty, only to succumb to her injuries before she could fire the shot that would have helped in transforming the Alone that appeared that day.

After resting for yet another day, Rei wakes up to find the key she thought she lost now beside her. Akane later explains that she and her friends tried to look for the key where she was found by Akane and they spent the whole afternoon looking for it. Although overjoyed to get her most cherished key back, Rei still refuses to go with Akane to the summer camp, and even tells Akane to stop being kind to her from now on.

Rei, unlike the girls who use the Vivid System, is gifted with the special ability of giving additional strength to Alones by hitting them with arrows she manifest using her willpower, which she fires using a bow that resembles a pair of black wings with a makeshift handle made out of a length of cloth in the middle.

Detail sketches of Rei, with full color design in the middle.

Rei's key, which she wears around her neck.

Rei Kuroki in her Palette suit in Miracle Girls Festival 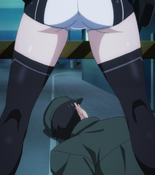 Rei pulling up her shorts